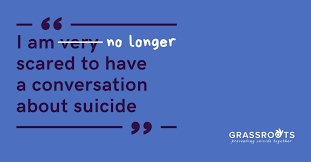 Suicide is an extremely difficult problem to solve, but there are steps you can take to prevent it. Keeping the following tips in mind will help you to avoid the devastating impact of suicide. First, you should know the factors that increase the risk of suicide. Suicidal behavior often occurs in places a person frequents. Whether it is at home, school, or the home of a loved one or friend, a suicide act is likely to occur there.

First, it is important to recognize the signs of suicide. While there are many factors that can contribute to suicidal behavior, prevention programs aim to eliminate the risk factors and promote resilience. In 2020, nearly 46,000 people died by suicide in the United States. Another study found that 12.2 million adults had seriously considered suicide, made plans, or attempted suicide. This is 30% higher than the numbers in 2000. By recognizing the signs of suicidal behavior, there are effective ways to prevent it and to support a loved one.

People who are at risk of suicide should be encouraged to seek help. One of the most significant barriers to prevention is the stigma attached to mental illness. People who commit suicide may be suffering from an undiagnosed mental health problem, but they are unlikely to admit this. The stigma associated with mental illness also prevents many people from seeking help. In many cases, suicide is the result of a mental health problem that went undiagnosed, which makes it difficult to prevent.

Talking to a trusted adult about suicidal thoughts is an essential step in preventing suicide. It is vital to make sure both you and the person you are talking to are on the same page. Ask questions about the timing, method, and plan of action. Identify what triggers the thoughts and make sure you can reach out to a medical professional immediately. This way, you can intervene quickly and help the person in need.

Another way to prevent suicide is to develop a safety plan. These plans can include ways to communicate with friends and family and how to recognize suicidal thoughts. You can also create a list of contacts you can call in case of a crisis. Having a plan can prevent the person from feeling alone, reducing the chance that the suicide attempts will happen again. In addition to talking to friends and family, you can also help people talk to a loved one about suicide.

A comprehensive study of the causes of suicide is important. The CDC’s National Violent Death Reporting System (NVDRS) collects data on violent deaths across the United States. However, the program was not fully funded until 2018, making it difficult to paint an accurate picture of the suicide epidemic in the U.S. Even though there is no one way to prevent every single suicide, you can help prevent more tragedies by being informed about these causes and finding effective ways to help those in need.

As well as talking to loved ones about suicide, you can also encourage people to practice critical thinking skills and develop coping strategies. These skills can be life-saving for someone with suicidal thoughts. Building stronger connections and limiting isolation can also help. The Interpersonal-Psychological Theory of Suicide outlines connectedness as the major component of suicidal behavior. Research indicates that depression and social isolation are related, as well as a sense of being burdonsome. These factors can result in decreased fear of death and low levels of connectedness. Habituated experiences of violence can increase the risk of suicide.

If you know a suicidal teen, don’t ignore their warning signs. You can also talk to a trusted adult who will listen and not judge them. This will help you avoid the worst outcomes of their suicidal actions, and can save their life. It is important to understand that suicidal thoughts are a symptom, not a diagnosis. The sooner you act, the better. So, if you suspect a suicide attempt, seek help.

The most effective way to prevent suicide is to know the warning signs. Some of the common warning signs include excessive sadness, threatening self-injury, and reckless behavior. If you notice any of these symptoms, contact a suicide prevention lifeline. They will offer confidential support 24 hours a day, seven days a week. Even if you can’t face the person immediately, it won’t hurt to ask for help. You’ll know that you’re dealing with a serious problem.