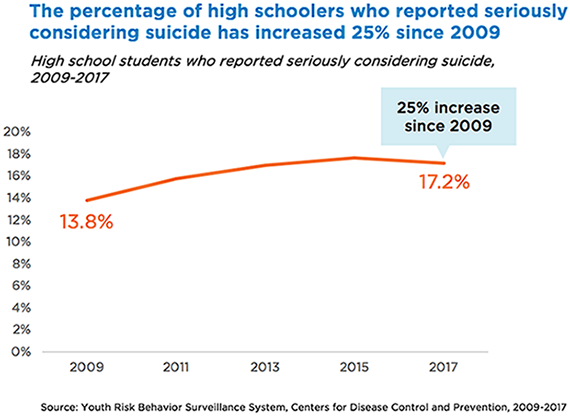 Youth suicide is when a young person intentionally takes their own life. Youth is generally defined as someone who is under the legal age of majority. It is a serious issue that affects many countries, including Western societies. Rates of suicide among youths are high. It’s important to understand the causes, symptoms, and treatments.

The risk factors for youth suicide vary widely. Some types of event stressors are more common than others, and others are less prevalent. A significant proportion of suicides in young people can be linked to poor communication within a family. In particular, direct conflicts with parents may be a major risk factor. Violence within the home is another common factor.

There are many steps parents can take to prevent suicide. First, they can try to get the adolescent to talk to them. However, sometimes this is difficult, as the adolescent is not comfortable with sharing his or her feelings with a parent. As a result, parents may want to find an objective third party to help. For example, a trusted medical professional or school counselor may be a great source of help.

Secondly, youth suicide can be prevented by addressing the causes of the problem. Changing family values, sexual freedom, and changing expectations are among the major causes of youth suicide. In addition, technology such as smartphones and cyberbullying can make youths more susceptible to suicide. Research suggests that eliminating the factors that cause psychopathology in young people can help prevent 78%-87% of suicides.

While youth suicide is a complex issue, there are many different programs designed to prevent it. In addition to individual interventions, schools and organizations should focus on educating teachers, parents, and other school personnel on suicide prevention. These efforts should be matched with effective mental health services. However, many programs that are designed for youth suicide prevention have not received sustained funding.

The Centers for Disease Control and Prevention has established the Youth Risk Behavioral Surveillance System. This survey is a national and state-level survey that monitors risk behaviors for youth. In addition, the survey includes information on the prevalence of unhealthy lifestyles and behaviors that indicate depression or suicidal ideation.

The Department of Children and Families is dedicated to reducing the rates of youth suicide. It is the third leading cause of death among New Jersey youth aged 10 to 24. If you are at risk of suicide, call 911 right away. You may have no other option. If you have the means and the motivation, don’t wait. Take action today!

While youth suicide is complicated and difficult to talk about, it is important to remember that it is often preventable. The right intervention can make a huge difference in the lives of these youth. In order to prevent youth from losing their lives, we must first recognize the signs of depression. Using resources such as the Blueprint for Youth Suicide Prevention can help make the difference. And remember, it doesn’t take a special professional to recognize and treat a young person at risk.

Until 1990, the youth suicide rate in the United States was relatively low, comprising less than five percent of all suicides. However, the rate of suicide among 15-to-24-year-olds increased dramatically in this period. From 6.3 suicides per 100,000 people to nearly 17 per 100,000, young males and females saw their risk of suicide tripled.