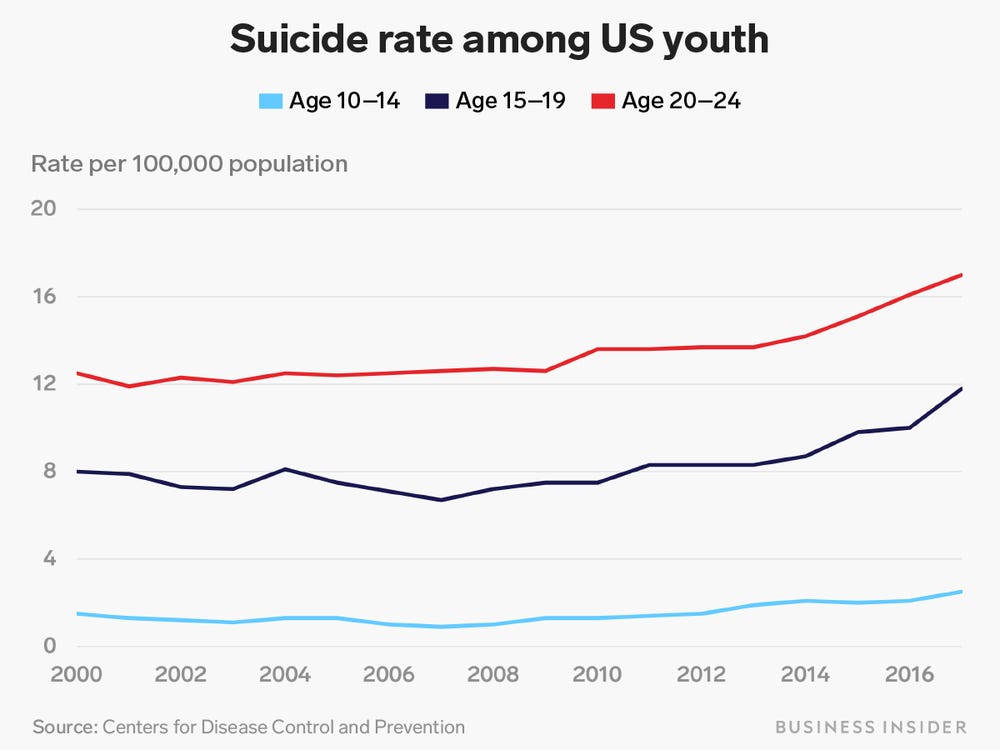 While many people are reluctant to discuss suicide with their children, the truth is that depression and suicidal feelings are treatable. While it may be difficult to see how a child’s feelings can affect his or her behavior, it is important to recognize signs of youth suicide and intervene. Suicidal thoughts often manifest themselves in a number of ways. For example, a youth may have stopped planning for the future, or he or she may be giving away important possessions. Often, a parent may be the first person to notice changes in a child’s behavior.

Several studies have shown that the rate of suicide among young people has increased over the past decade. The rates were largely stable between 2000 and 2007, but spiked again as the economy entered recession in late 2007.

According to the YRBS, the rate of suicide among U.S. high school students increased from 5.7 to 11.1 per 100,000 population in the past year. Since then, the rate has decreased to 7.4 per 100,000. However, it remains twice as high as before. Suicide attempts among youth account for 13% of all U.S. suicides. But these statistics aren’t all bad. With the help of treatment and awareness programs, this statistic can be reduced.

There are many youth suicide prevention programs. Only a few have been systematically evaluated and supported by empirical evidence. However, there are promising results from the early efforts, and more research is needed. The issue of suicide among youth is a pressing public health issue. Those who are concerned about the problem should be informed and aware of the risks of suicide. If you’re concerned about a young person’s health, contact a health care provider.

Suicide is a complicated topic, but it can be prevented. By identifying a young person’s risks, pediatric health clinicians, educators, peers, and family members can help them avoid a tragic outcome. The prevention of youth suicide is a priority, and the work of pediatric health clinicians can make a significant impact. However, national leadership is required to move forward. It is imperative that we address youth suicide as a national health issue.

In recent decades, population-based psychological autopsy studies have been conducted to understand the causes of youth suicide. This process involves interviews with key informants, examining records, and completing follow-up studies on individuals who had attempted suicide. Such studies can provide useful insights into the causes, symptoms, and risk factors for youth suicide. Despite its complexity, suicide is one of the leading causes of death among young people around the world. Research on youth suicide has increased significantly in recent years, but there is still a significant need to understand what causes it.

While these trends may be worrying, it is important to know how suicide rates are distributed. While it is important to acknowledge the challenges of dealing with the increasing number of young people who attempt suicide, the fact remains that it is a public health concern that requires immediate attention. More research is needed to understand these trends and develop effective strategies to reverse them. However, the need for effective prevention is greater than ever. This research is necessary as more youth die by suicide.

Although there are many potential factors contributing to the risk of youth suicide, only a small proportion of young people who commit suicide receive psychiatric treatment. This means that broad suicide prevention strategies need to be implemented in both social services and healthcare. Primary care clinicians are key in recognizing youth at risk. So, how can primary care clinicians recognize and intervene? This article reviews some population-based psychological autopsy studies. It also identifies risk factors for youth attempted suicide. In addition, the relationship between mood disorders and suicide is well established. Several factors have a mutual impact on each other.